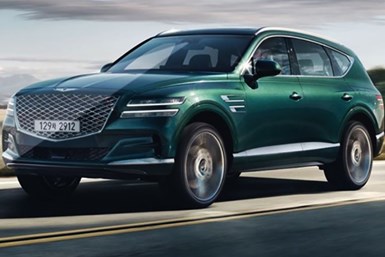 There’s plenty to like about the all-new model. For its part, Genesis gushed about the GV80’s styling, which builds on the brand’s “athletic elegance” design language, and advanced technology.

As the fourth model in a planned six-vehicle lineup, the GV80 comes at a pivotal time as Genesis struggles to win customers. Here are a few takeaways on the vehicle and its role in the brand’s future:

Genesis’ first three vehicles are rear-wheel-drive sedans: the G70, G80 and G90. All have been widely lauded within the industry. In fact, the G70 sport sedan was named the 2019 North American Car of the Year.

The GV80 is much more in line with where the market is and likely will continue to trend. It sits higher and has more utility—including optional third-row seating—than Genesis’ current offerings.

These are things people like. Lots of people. SUV/crossovers and pickups accounted for 75% of new vehicle sales last year in the U.S. The GV80 finally gives Genesis a chance to reach these buyers.

Making a good first impression is critical, and the GV80 doesn’t disappoint. The crossover’s styling lives up to its luxury billing, inside and out, holding its own against its chief competitors: the BMW X5 and Mercedes-Benz GLE. 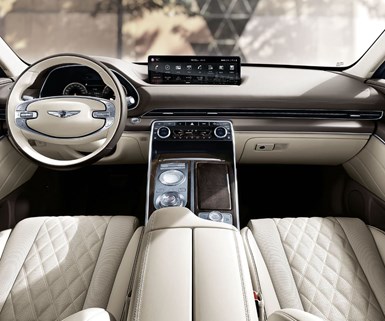 This should come as no surprise. Genesis’ design team is chockfull of top-end talent. Led by Luc Donckerwolke, who heads Hyundai Group’s overall design efforts, Genesis draws from years of experience at Audi, Bentley, Bugatti and Lamborghini.

The G8V0 was a collaborative effort among Genesis’ studios in Korea, Germany and the U.S. It’s exterior is highlighted by a large mesh-like grille topped by the winged Genesis logo. But Donckerwolke believes the vehicle’s distinctive “quad-lamp” light strips, with squared-off LED projectors, will become the brand’s signature design.

Interior goodies include a host of plush materials—even quilted knee pads—and a 14.5-inch, split-screen infotainment display. There’s also a handwriting recognition system that lets drivers spell out a destination and input other commands (presumably if voice-actuation isn’t working) rather than typing it on a touchscreen.

The GV80 aims to live up to its Genesis badging with several industry firsts. The list includes:

The vehicle also is equipped with a host of driver-assist systems, covering everything from forward collision and rear cross-traffic to blind spots and lane changing. An augmented reality navigation system, which superimposes route guides over video feeds of the road to help keep drivers on track during low visibility, also will be available in some markets.

BMW and Mercedes continued to lead the luxury market last year with global sales of 2.3 million and 2.1 million units, respectively. 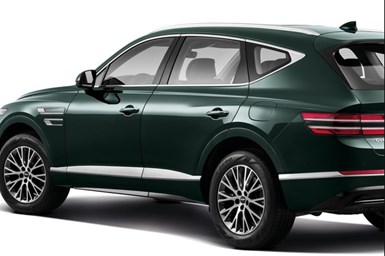 Genesis pales by comparison. It delivered fewer than 90,000 cars. More than 70% of the volume came from Korea, with the U.S. accounting for the remainder.

But the company has big plans, relatively speaking. Genesis aims to grow sales 30% this year, then top that rate in 2021.

More crossovers are coming. Next up is the slightly smaller GV70 in 2021. That vehicle is projected to be the brand’s top seller. The rollout will continue with an all-electric model, which also is expected to a crossover.

But it all starts with the GV80, which bows later this month in Korea. U.S. sales are due to launch in the summer.