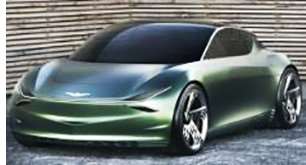 Hyundai Motor Co.’s Genesis brand says its tiny Mint electric concept car shows the potential for a future luxury city car. The vehicle, which has little chance of going into production, was unveiled this week at the New York auto show.

The little two-seater was designed by staffers in Germany, South Korea and the U.S. Genesis describes the result as an “accessory for the modern urban lifestyle.” The stylish coupe features a grille-less front end, thin wraparound LED headlights and taillights, and a sloping roof line.

One of the most unusual elements are the Mint’s scissor-style hatchback doors that open up and outward. Instead of a traditional rear cargo area, the vehicle has a parcel shelf to haul small items that can be accessed easily, Genesis says.

The minimalist passenger compartment is fitted with a bench seat that can rotate toward either door to aid ingress/egress. The rectangular steering wheel is surrounded by six small circular display screens. A seventh screen is positioned in the middle of the steering wheel.