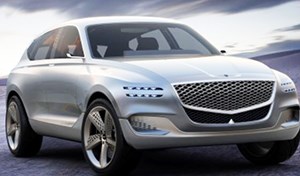 The new model will be a production version of the 2017 GV80 concept (pictured), Genesis CEO Manfred Fitzgerald tells Motor Trend. The vehicle will compete against the BMW X5 and Mercedes-Benz GLE.

The slightly smaller GV70 crossover is due in early 2021, MT says. Genesis also has said it will add another unidentified model within the next two years.

The third model could be a production version of the 2018 Essentia concept sporty coupe. Fitzgerald says Genesis is evaluating different configurations of the car, which in concept form featured an all-electric drivetrain.

Genesis also is exploring the potential of this year’s Mint city car concept. Fitzgerald says the car, which debuted at the New York auto show in April, “hits all the marks.”