When you’re driving a super-expensive supercar, maybe you want something more than just traditional sideview mirrors. Gentex and Aston Martin are testing a new approach that provides camera-based views too.
#Gentex #tech #AstonMartin

Gentex has developed a rearview mirror concept that allows drivers to switch between or combine views from three rear-facing cameras and a traditional mirror.

Gentex will show off a prototype at CES this month in Aston Martin’s DBS Superleggera supercar. The iconic British carmaker plans to use the tech in a future production model, but details haven’t been released. 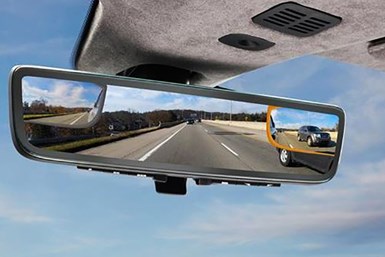 In the Superleggra, video cameras are mounted on the roof and within the two exterior side mirrors. Drivers can view live feeds from all three on Gentex’s Full Display Mirror, which functions as either a standard auto-dimming reflective unit or as an LCD display.

Rearview cameras provide a broader and unobstructed field of vision than mirrors—without pesky rear-seat passengers or large C-pillars getting in the way. There also could be aerodynamic and fuel economy benefits if the side mirrors are eliminated and replaced with tiny cameras.

Several carmakers already offer blind-spot video feeds. A handful, such as Cadillac and Nissan, have incorporated camera-based displays (developed by Gentex, Magna and other suppliers) into the interior mirror. All of the latter systems allow drivers to revert to traditional mirrors in the case of a power failure, bad weather or preference.

But Gentex claims the Aston Martin concept is the first with a hybrid (mirror/camera) mode. Feeds from the three cameras can be displayed in what it calls a variety of “intuitive” configurations. If the exterior mirrors are adjusted, the field-of-view of the corresponding cameras are reset to optimize coverage.

Last summer, NHTSA began testing the viability of replacing traditional rearview mirrors with cameras. For now, however, such cameras are allowed in the U.S. only in conjunction with a mirror. Given that the concept does function as a conventional mirror, presumably it is OK.