Gentex, which now is best known for auto-dimming rearview mirrors and other car electronic devices, was founded in 1974 as a pioneer of smoke detectors.

The Zeeland, Mich.-based company still makes smoke alarms, although the business only accounts for about 1% of its overall sales. But Gentex sees an opportunity to apply the technology to its main automotive market.

CTO Neil Boehm believes such capabilities will become increasingly important as the car industry transitions to shared mobility services, such as car-sharing fleets and robo-taxis. Riders want a clean, smoke-free environment, Boehm says, noting that people can be even more demanding about vehicles they don’t own.

It’s pretty straightforward. A sensing unit is placed within a vehicle’s ductwork to continuously sample air quality. If smoke is detected, the system can sound an alert and/or notify whoever owns or operates the vehicle. 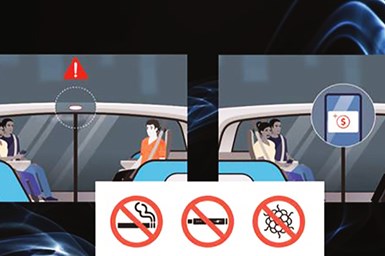 Gentex plans to introduce a smoke detection system in an autonomous shuttle next year.  (Image: Gentex)

The vehicle automatically is flagged for cleaning. And those responsible for the smoke (which could be verified by camera monitors) could be assessed a fine.

As with smoke detectors for buildings, the car systems would be sophisticated enough to differentiate between smoke (including vape) and smoky clothes or burned food.

The same principle can be applied to detect a variety of other substances… including vomit. This likely would be used for cleaning purposes only rather than penalizing someone for getting car sick, Gentex notes.

The technology also could be integrated with a traditional air filter. And even more sophisticated nano-sensors (we’re talking parts per billion analysis) could be used for security applications: explosives and harmful chemicals.

For now, Gentex is focusing on smoke detection. The supplier is working with an unnamed autonomous vehicle company to fine-tune the system, which they plan to launch next year in a self-driving shuttle.