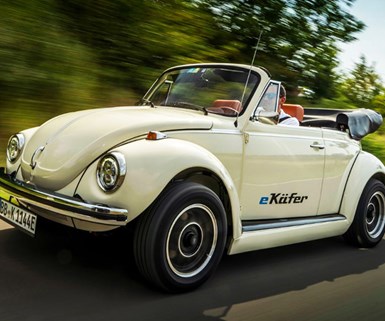 VW’s Components Group supplies parts for the EV, which is known as the eKafer. The conversion involves installing the drivetrain from the VW’s e-Up electric city car.

Kensington, England-based Jack’s Garage also will build the converted EVs for eClassics. The U.K. firm says it has received interest from potential customers across Europe and the U.S. for the model, which it unveiled at the Frankfurt auto show in September.

In addition to the Beetle, eClassics and Jack’s plan to build electrified versions of other historic Volkswagen Group models, including the VW Type 2 minibus and the Beetle-derived Porsche 356.

EClassics also will sell the electrified floor pan, complete with a 35-kWh battery and 80-hp electric motor, to do-it-yourselfers for €39,900 ($44,200). A higher output variant is available for an extra €15,900 ($17,600). Other options include antilock brakes, LED headlights, touchscreen navigation, bi-directional charging capability and amenities such as leather seats and air conditioning.