Time to dust off a tried-and-true way to perk up car sales, Germany’s auto industry says.

So-called cash-for-clunker programs popped up all over the world a decade ago. Such schemes pay consumers whose cars are at least 10 years old a big bonus if they scrap their vehicle and buy a new model. 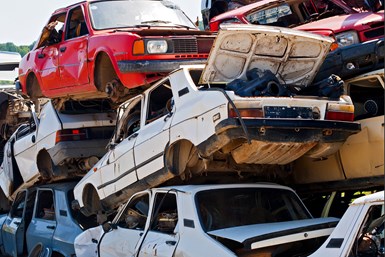 Now Germany’s auto industry is urging a new round of scrappage programs to help get car sales back on track in Europe. Last month, the region’s sales plunged 52%, the worst monthly decline ever, according to trade group ACEA.

Analysts predict that Europe will see even worse results for this month.

The industry’s pitch comes as car dealerships in Germany are reopening their showrooms. That’s an obvious first step, the industry says. But carmakers contend that the industry needs more to coax consumers reeling from the coronavirus pandemic to return to the new-car market.

Proponents a decade ago pointed out that scrapping old cars helps reduce air pollution. That’s also one way to convince governments to help pay for a cash-for-clunker program, especially if it is structured to favor the industry’s most fuel-efficient models.

Germany’s federal government, a frequent skeptic of paying for costly sales campaigns, notes that the country’s auto industry has peppered it with multiple recommendations. Officials have made no decision but are expected to meet with labor and company representatives on May 5 to discuss options.

U.S. legislators share that situation. They too are weighing several approaches as American producers make the same arguments.

Taking steps to rapidly resuscitate the European auto market would certainly ease the industry’s financial woes. The immediate need is to sell down dealer inventories. But those cars are vehicles that carmakers have already booked as factory sales.

More important, Europe’s producers need a solid upturn in demand to justify calling back its workforce and resuming production. That argument seems more likely than the environmental angle to resonate with government leaders.