Get Ready for an Electric Truck Caravan

A group of 15 states and Washington, D.C., have signed a memorandum of understanding that aims to accelerate the electrification of commercial trucks and buses. 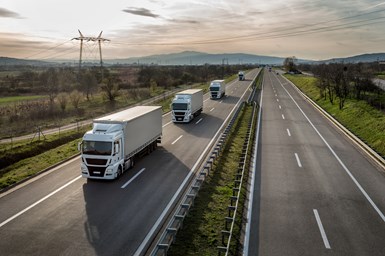 Under the voluntary agreement, 30% of new medium- and heavy-duty trucks sold in participating states would be zero-emission vehicles (ZEV) by 2030. By 2050, 100% of such models would be ZEVs.

Within six months, the group plans to identify barriers and propose initial solutions to meet the targets. This includes developing an EV charging infrastructure and earmarking potential purchase incentives.

Buses and big rigs generate 25% of transportation-related greenhouse gas emissions, despite accounting for just 4% of the U.S. vehicle fleet.

And the problem is getting worse. Emissions from trucks are the fastest growing source of greenhouse gases, and the number of truck miles traveled on U.S. roads is expected to increase rapidly in coming decades, according to industry forecasts.

Commercial vehicles are a major source of smog, particulate matter and air toxics. These emissions disproportionately impact low-income communities that often are located near trucking corridors, ports and distribution hubs, the group says.

Last month, California announced its own plan. The slightly more aggressive rollout starts in the 2024 model year, when as much as 9% of a truck manufacturers’ sales must come from ZEVs, and culminates with a 100% mandate by 2045.

To provide a framework and help coordinate state efforts, the signatory jurisdictions will work through the existing multi-state ZEV Task Force facilitated by the Northeast States for Coordinated Air Use Management. The latter is a nonprofit association of air quality agencies.

The new consortium of states plan to work with manufacturers to help accelerate the development and launch of new EVs. The group estimates that there are more than 70 electric truck and bus models already available, with dozens more due to launch over the next decade.