Fugitive auto executive Carlos Ghosn used a lengthy press conference in Beirut on Jan. 8 to reiterate claims of innocence and mistreatment by prosecutors in Japan.

But the ex-chairman of Nissan added nothing new about how he intends to defend himself while in exile in Lebanon against charges of financial wrongdoing at Nissan.

Instead, he reiterated points made in a court statement a year ago that he had been wrongly accused and unfairly detained in Japan. He described himself as a hapless victim of a conspiracy between Japanese prosecutors and “malevolent actors” at Nissan who were eager to torpedo his attempt to merge the company with French alliance partner Renault. 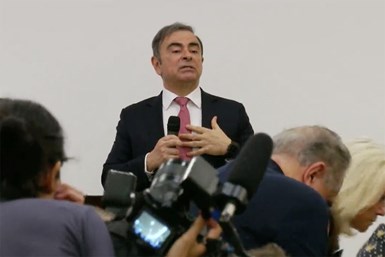 The 64-year-old also blamed Nissan’s failing financial health on the caliber of those same executives, declaring that the figures speak for themselves.

Ghosn was arrested in Tokyo more than 13 months ago and eventually charged with four counts of financial wrongdoing at Nissan. Today he displayed documents that he claims prove Nissan executives—including former CEO Hiroto Saikawa—had signed off on a plan to divert retirement compensation. He first addressed all four charges against him in a court appearance exactly one year ago.

Ghosn blasted the Japanese judicial system as anachronistic and inhumane, complained bitterly about his treatment in captivity and insisted “I never should have been arrested in the first place.” He said Japanese prosecutors, who enjoy a 99% conviction rate, repeatedly advised him his situation would “only get worse” if he continued to resist.

Shifting easily between Arabic, English or French to field reporters’ questions, Ghosn said he fled Japan two weeks ago after concluding that a fair trial there was impossible and that he literally might die there.

Ghosn offered no comment or confirmation of media reports about how he eluded heavy surveillance in Tokyo two weeks ago. Cynical media reports opined that he may be holding details to bolster the prospects of a rumored movie deal about his escape.