Electric vehicles are the new “thing” for General Motors in China.

The company says 40% of the new models it introduces there by 2025 will be electrified. All will be locally produced. 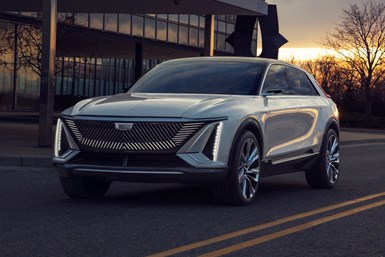 Julian Blissett, president of GM’s China operations, tells Reuters that the Cadillac and Buick brands are both “on a path to very heavy electrification.” The shift, he says, reflects changing demand, adding that “standing still in China doesn’t work.”

To put it in terms of product development, half of GM’s engineering focus and capital spending over the next five years—a budget of more than $20 billion—will be on electrification and self-driving technologies, according to CEO Mary Barra.

Blissett says GM is eager to restore its sales volume in China, where the overall car market shrank 10% to 25.4 million units from 2017 through 2019. Over the same period, GM sales fell more than 20% from a record 4 million units, and the company’s market share slid two percentage points to 12%.

To bolster sales, GM also will put more emphasis on its connectivity, driver assist and semi-autonomous driving features in China. The company says it will expand availability of its Super Cruise hands-free driving system to its Buick and Chevrolet brands, and make it an option for all Cadillac models by 2025.

By 2022, 5G cellular connectivity will be offered on most Buick and Chevrolet models and all Cadillac lines in China. Declares Blissett, “We are ready to activate a new era.”