Solar and wind sources will generate 100% of U.S. facilities by 2030
#tech #sustainability #emissions

Under a new agreement with DTE Energy, General Motors plans to transition all its facilities in southeast Michigan to renewable energy (solar and wind) by 2023. 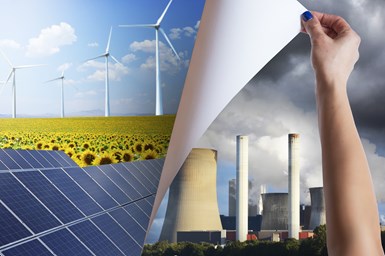 Fittingly, both plants currently or soon will produce electric vehicles. Orion Assembly builds the Chevrolet Bolt, while Detroit-Hamtramck will build the upcoming GMC Hummer, Cruise Origin and other future EVs. In addition, GM plans to expand the availability of workplace charging stations in Michigan, which also will be powered by wind and solar as part of the new DTE program.

The new agreement calls for purchasing 500,000 MWh hours of solar energy from the Detroit-based utility, bringing the combined total to 800,000 MWh. GM says this is equivalent to the electricity consumed by more than 100,000 homes in an average year.

Both programs are part of DTE’s MIGreenPower initiative, which allows customers to designate a greater percentage of their energy use to wind and solar energy. All DTE customers receive the equivalent of at least 12.5% of energy from renewable sources. (Energy produced via DTE’s solar and wind parks goes directly to the power grid, so actual utilization rates won’t necessarily match a user’s participation level).

GM says there initially will be a slight cost increase for using renewable energy. But it expects this to transition into savings as pricing for the “green” power comes down.

On DTE’s website, customers can calculate the current cost of solar and wind energy based on usage.

GM plans to transition its U.S. facilities completely to renewable energy sources by 2030 and do the same worldwide by 2040.

Solar and wind power already account for nearly 25% of the electricity used by the carmaker’s global operations. This will increase to 33% under the DTE commitments.