GM says the facility will start producing its first new EV, an all-electric pickup truck, by the end of next year. That’s a few months later than the timetable CEO Mary Barra described to investors in November. Media reports predict the truck will be sold under the carmaker’s resurrected Hummer brand. 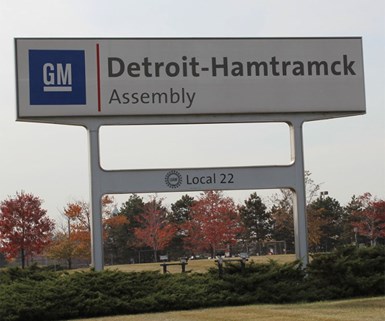 Back from the Dead

GM had planned to shut down the 35-year-old Hamtramck complex this month. The company reversed course in October to help end a 40-day-long strike by the United Auto Workers union and cinch a new four-year labor agreement.

Now GM says it will spend $2.2 billion to overhaul the factory’s paint, body and final assembly areas. The refurbished plant also will assemble batteries for the EVs it makes, using cells supplied by GM’s joint venture with LG Chem from a separate $2.3 billion plant being built in Lordstown, Ohio.

With capacity to build 230,000 vehicles per year, Hamtramck in its heyday employed 2,600 people. Only 900 employees work there now, and the factory operates on just one shift, GM says.

Lately, the facility has been making Chevrolet Impala and Cadillac CT6 large sedans, neither of which is selling well. Both of those models will go out of production in February as the factory swings into a protracted shutdown for retooling.

Detroit-Hamtramck is no stranger to electrified powertrains. The factory was home to the extended-range Chevrolet Volt sedan, which launched in 2010. The plant also made Volt variants for Europe (the Opel/Vauxhall Ampera) and Australia/New Zealand (Holden Volt). The plant stopped producing Volts in February 2019 as sales continued to fade.

This time around, GM is all-in on full EVs. If it all works out, Hamtramck will soon launch a new career as GM’s primo source for battery-powered pickups and SUVs.