General Motors is unwinding the Maven car-sharing service it launched in 2016.

The service started out in Ann Arbor, Mich., as a supplier of on-demand, short-term rentals priced between $6 and $12 per hour. 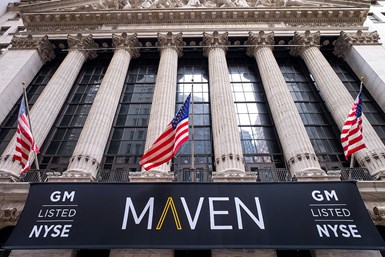 GM also gave Maven oversight of the carmaker’s peer-to-peer car-sharing programs—conducted mostly on its own campuses—in China, Germany and the U.S.

The startup quickly pivoted its focus to the peer-to-peer market. Maven members could rent out their GM vehicles to other members after setting their own rates and agreeing to share 40% of the revenue with the carmaker.

Then GM added Maven Gig, which offered short-term leases to drivers for such services as Uber and GrubHub.

At its peak, the business operated in 17 cities in the U.S. and Canada. The unit most recently has been headed by Sigal Cordeiro, who took over early last year. She will become executive director of sales, marketing and partnerships with GM’s Global Innovation unit, which also will absorb most of Maven’s assets.

GM says Maven will be phased out market by market between now and this autumn, then shut down completely. The little company, which never gained much traction, has 45 employees.

Last year Maven pulled out of eight cities, including New York City, citing the need to concentrate on markets with the strongest demand and the best chance of growing.

GM says the frequently morphing company has provided “extremely valuable insights” about car-sharing which will be applied elsewhere at the carmaker.