General Motors says it will spend $2 billion to enable its assembly plant in Spring Hill, Tenn., to make electric vehicles. 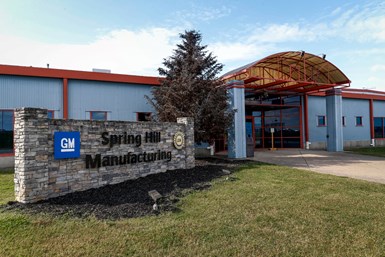 The company is investing $2.2 billion to transform its 35-year-old Detroit-Hamtramck plant—now known as Factory Zero— into an EV-only facility for electric SUVs, pickup trucks and driverless shuttles.

The 7.9 million-sq-ft Spring Hill complex, which opened in 1990 to make Saturn sedans, is GM’s largest factory in North America. Its first EV will be the Cadillac Lyriq, which is expected in 2022.

The 3,800 workers at Spring Hill will continue to build piston-powered Caddy XT5 and XT6 crossover vehicles. But GM is spending $100 million to move production of the next-generation GMC Acadia crossover vehicle from Spring Hill to the company’s Delta Township complex outside Lansing, Mich.