General Motors is starting to flesh out its electric vehicle plans.

The carmaker, which aims to introduce 20 EVs by 2023, has identified 12 of the upcoming models by vehicle type and provided a brief description of each in its annual Sustainability Report. 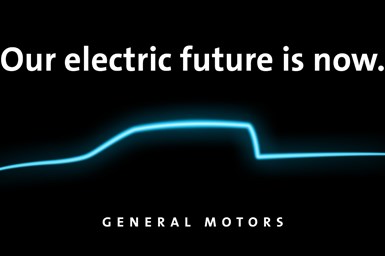 GM has committed to spend $20 billion to develop and launch EVs and autonomous vehicles over the next five years. Broken out by brand, the initial 12 EVs are:

Most of the new models will use GM’s third-generation BEV3 platform, which can support a range of front-, rear- and all-wheel-drive vehicles. GM says the platform will carry vehicles capable of driving as far as 400 miles per charge and accelerating from zero to 60 mph in as little as 3 seconds.

The platform also will carry the Cruise Origin, a self-driving electric shuttle that GM is co-developing with Honda. Production of the Origin is due to start in 2022 at GM’s revamped Detroit-Hamtramck factory.

The EVs will be powered by the Ultium batteries GM is co-developing with LG Chem. Capacities will range from 50 to 200 kWh. Initially there will be just 19  battery and drive unit configurations. By comparison, GM notes that it currently offers 555 internal combustion powertrain-based powertrain combinations.