General Motors’ Super Cruise technology can handle most major highways in the U.S. and Canada, allowing users to switch to semi-autonomous mode—hands-free driving with adaptive cruise control—on more than 200,000 miles of road.

But for tooling around on local streets, you’re left to your own devices. Hands on the steering wheel. Eyes on the road. The same as it has always been.

This soon may change. GM says it is making a number of improvements to the SAE Level 2 technology, including the capability to operate Super Cruise on a variety of roads—from downtown areas to neighborhoods and subdivisions—as well as going from one highway to another. 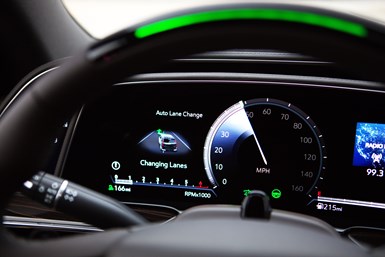 The upgraded system is referred to internally as Ultra Cruise, although GM says it may use a different name for the final version. No timeline was given for the off-highway feature, which Doug Parks, GM’s executive vice president of global product development, announced on Tuesday during an online industry symposium.

Several carmakers already, or soon will, offer semi-autonomous driving systems for highway operation. Making the technology work on city streets is more challenging. These applications have to contend with intersections, two-way traffic, pedestrians, bicyclists, changing speed limits, curbs and lots of other variables.

GM launched Super Cruise in 2017 as a $2,500-plus option on the Cadillac CT6 sedan, a model that was discontinued in January.

Several other Cadillacs are getting the technology this year. By 2023, GM plans to offer the system on 22 nameplates across its Buick, Cadillac, Chevrolet and GMC brands.

Last year, the carmaker announced several improvements. These include:

About one-third of CT6 owners opted for the pricey Super Cruise option. More than four in five who have it, want it on their next car too, according to Cadillac.

Drivers engage the system about half the time it’s available for use on the highway.