Cruise Automation has been given the go-ahead to let non-employees ride along in the self-driving cars it has been testing in San Francisco.

The company, a unit of General Motors, has been testing robotic cars in California for more than four years. But it has done so under a permit that restricts vehicle occupancy to employees. 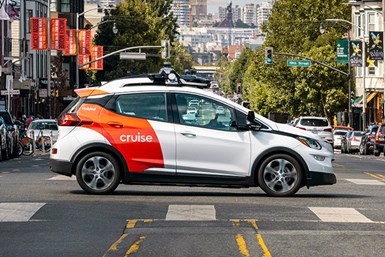 Cruise initially will use its expanded permit very selectively, and primarily as a recruiting tool to dazzle would-be hires with its technology. The company also says it will give rides to select news media.

The demo rides will use Cruise’s current fleet of Chevrolet Bolt EV sedans, not the new Origin shuttle unveiled last month. A safety driver must be in position to take control if necessary, and the company won’t be allowed to charge for any rides.

What about rides for the general public? Rival Waymo has been hauling civilians around in Arizona in autonomous minivans for nearly three years. In October, it began doing the same in vehicles with no driver on board.

No Public Rides Yet

Cruise could do the same in California under its new permit. But the company says the option is not an immediate priority.

When Cruise is ready to begin toting general riders, it likely will do it with its purpose-built Origin shuttle. The company hasn’t said when the fully autonomous Level 5 vehicle will hit the road.