General Motors says the bevy of electric cars and trucks it begins to introduce later this year will be profitable, thanks to a new and more powerful type of battery.

Unlike current lithium-ion batteries, which look like rigid boxes or cylinders, GM’s Ultium battery is a thin, soft-sided pouch that can be packaged more efficiently.

Power and Range for EVs

GM says the new battery, which was developed by South Korean battery supplier LG Chem, also is about 60% more powerful than the lithium batteries used in its all-electric Chevrolet Bolt sedan.

The extra power will give GM’s new family of EVs a range of as much as 400 miles, according to the company.

Price is a very big deal with EV batteries. GM claims the Ultium design will be cheap enough—less than $100 per kilowatt-hour—to make EV prices comparable to those of similar piston-powered cars. The lower cost is made possible by the battery’s nickel-manganese-cobalt-aluminum chemistry, a blend that uses 70% less cobalt and nickel than conventional lithium-ion batteries.

GM and LG Chem formed a 50:50 venture in December to make Ultium batteries. They are spending $2.3 billion to erect a factory near Lordstown, Ohio, beginning this summer. When the giant facility goes into operation around the end of 2022, it will be one of the world’s largest batterymaking facilities with annual capacity greater than 30 gigawatt-hours.

GM will use the plant’s output to power 20 EV models it plans to launch over the next five years. By mid-decade, the carmaker hopes to for an annual sales rate of at least 1 million EVs worldwide. 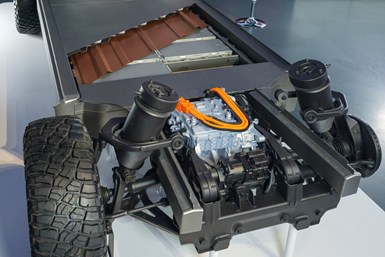 The North American portion of that volume will come from GM’s Detroit-Hamtramck assembly plant. The 35-year-old complex is undergoing a $3 billion makeover that will turn it into the company’s first electric-only factory.

The first of the GM electrics to get the Ultium battery will be the Hummer electric pickup truck, which will go into production at Detroit-Hamtramck in autumn 2021. Among the subsequent Ultium-powered models will be the all-new Cadillac Lyriq crossover due in 2022.

It’s not just all about batteries, however. GM also plans to power its EVs with a new family of electric powerplants. The company figures it will need only 19 variants compared with the 555 piston-based systems that propel its conventional vehicles.