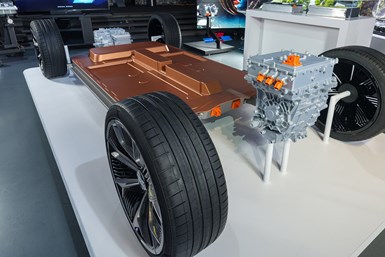 GM says the components can be mixed and matched to create front, rear and all-wheel electric powertrains. The company has estimated that it could power its lineup with only 19 electric powertrains compared with the 555 piston-based systems it uses now.

The architectures will be designed to cover virtually any type of vehicle, from small sedans and high-performance sports cars to heavy-duty pickup trucks and off-road SUVs, according to the company.

The Ultium Drive family consists of specific modules for:

The front- and all-wheel-assist drives each get their own purpose-designed motor. The rear-drive motor also can be used in certain front-drive powertrains. The two truck drives will employ one or two front- or rear-drive motors.

“As with other propulsion systems that are complex, capital-intensive and contain a great deal of intellectual property, we’re always better off making them ourselves,” says Adam Kwiatkowski, the company’s top engineer for global electrical propulsion.

That’s why GM is designing the components itself and will tap its global powertrain production capacity to make and assemble most of them. The company says the strategy will cut costs, enhance system performance and accelerate speed to market. GM tells Reuters it will consider buying certain components from other suppliers.

By orchestrating overall system design, GM expects to boost net powertrain efficiency. The company notes that integrating power electronics into the drive unit assembly has slashed the mass of those parts by 50% and hiked their capability by 25% compared with the company’s previous-generation EV systems.

GM will debut the modular powertrain systems next year in the 2021 GMC Hummer electric SUV, then the 2022 Cadillac Lyriq electric sedan.

The wireless battery management system GM revealed a week ago also will make it easier to maximize the performance of the company’s upcoming Ultium battery system with the new powertrain platform.

GM has big plans for the expanding Ultium brand. The company is spending $20 billion through the next five years on electrification programs and expects to debut 20 all-electric models over the same period.