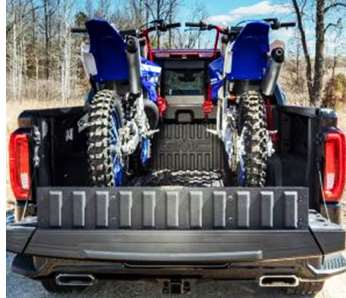 GMC announced the CarbonPro feature a year ago but didn’t offer it when sales of the 2019 model started last autumn. Initial availability this year will be limited to the top-end Denali and AT4 trim lines. Pricing hasn’t been announced.

GMC says it has been busy testing the lightweight system to ensure it meets the requirements of pickup truck owners. To replicate extreme usage scenarios, the carbon fiber box had cinder blocks, 450-lb steel drums and 1,800-lb loads of gravel dropped into it from various heights. Other tests involved driving a snowmobile with studded tracks into the bed and running a generator onboard for extreme NVH testing.

The box’s outer panels are steel. The carmaker claims the carbon fiber-lined floor and inside panels provide best-in-class dent, scratch and corrosion resistance. The unit also cuts weight by as much as 60 lbs over an all-steel box. Carbon fiber also enables for more complex designs, which GMC says adds one cu-ft of cargo space in the Sierra.

Three indentations are carved into the box to help users load dirt bikes and ATVs into the pickup. GMC says the The CarbonPro bed doesn't need a bedliner, and is grained at the top for better traction.