If you’re going to dream big, how about a car with adaptive tires that can regrow treads
#tires #tech #sustainability

Goodyear says it wants tires to be an “even more powerful contributor to answering consumers’ specific mobility needs.”

With this in mind, the company (figuratively) rolled out its latest futuristic concept. Dubbed “reCharge,” the system teams artificial intelligence with a self-regenerating tread. 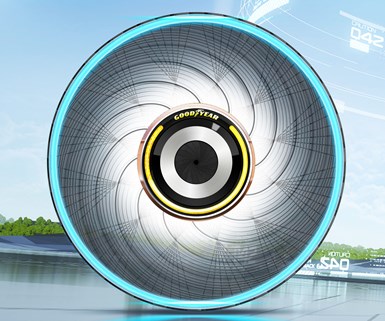 At the heart of the design are capsules filled with a customized liquid compound that Goodyear envisions could essentially grow new treads as the old ones wear down.

The compound would be made from a yet-to-be-invented biological material reinforced with fibers inspired by spider silk. The latter, as in the sticky, protein-based substance arachnids spin into webs and repelling ropes, is said to be one of the toughest and durable materials in nature. It’s also 100% biodegradable.

Varying the compound mix would allow the tread to adapt to weather and driving conditions over time. In addition, Goodyear says, artificial intelligence could be used to customize the tires for individual users based on personal driving styles. 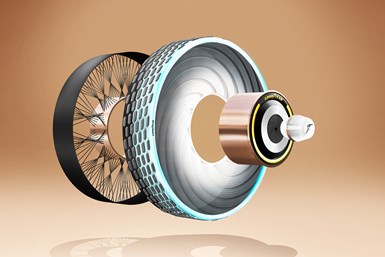 The treads are supported by a non-pneumatic frame with a tall, narrow shape. Goodyear notes that such an airless design would mean no more flat or underinflated tires.

For now, reCharge is just a cool, far-out concept. Just like last year’s Aero tire for flying cars and 2018’s Oxygene design, which contained living moss to help filter out carbon dioxide from the environment.

Such concepts have become an annual thing for Goodyear. In 2015, the company doubled down with two next-gen brainstorms. One tire was designed to generate electricity, while another featured a triple tube design that promised to boost efficiency by lowering rolling resistance.

While some of these ideas may seem unrealistic or downright wacky, keep in mind Goodyear’s history of innovation. In addition to pioneering the vulcanization process in 1842, the company also: