BMW’s signature kidney grilles have adorned the luxury marque’s models for nearly 90 years. They’re even front and center on the brand’s “i”-badged electric vehicles, which have no need for any type of grille—let alone a massive twin-unit design.

With the redesigned X6 crossover BMW has added a new twist: an illuminated grille. The system, developed by Hella, is offered as a $500 option on the 2020 model. 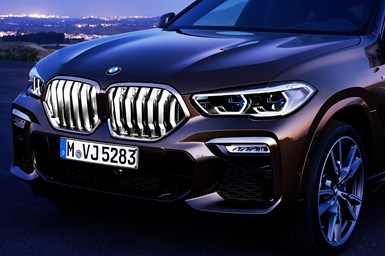 A 14-LED array is arranged in a narrow chrome frame in the shape of the distinctive kidney grille. The lights shine downwards through free-form optics, which the carmaker says generates a waterfall effect. A light guide integrated in the lower part of the frame provides ambient illumination for the side and lower part of the grille.

The grille lights automatically turn on when the car doors are opened. The driver also can control the lights manually, allowing the grille to shine while the car is in motion. In the latter case, Hella says the grille lights are integrated with the headlights and daytime running lamps, thus comply with legal requirements.

The company also supplies several other components for the third-generation X6. The list includes the crossover’s rear combination and interior lights and various electronic components, including intelligent battery sensors and voltage converters.

Other BMW models are expected to get their own Iconic Glow as they’re updated.

The treatment is part of a growing trend that uses LED technology to provide functional improvements as well as customization and styling pizazz. BMW’s chief rival Mercedes-Benz, for example, has offered an illuminated 3-pointed star for years. Bentley’s winged “B” hood ornament also lights up.

In addition, several companies offer “puddle lights” that project from the bottoms of the side-view mirrors. Such systems not only help occupants as they’re approaching and entering a vehicle, the lights also can be used to enhance branding by shining customized designs on the ground.

Hella, meanwhile, continues to improve its core headlight technology. The company’s latest 30,000-pixel array, which is due to launch in 2022, promises significantly better performance, improved packaging and the ability to add customized features—including light animation shows when the vehicle is parked.