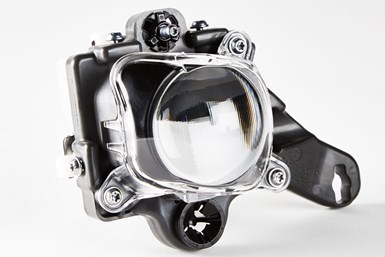 Hella says it has developed a new headlight system that can be easily adapted for different applications to meet varying regulations around the world.

The design will allow carmakers to use a single system in place of as many as a dozen different headlights that a global car currently may need to be sold from region to region, according to the supplier.

The new SSL 100 (solid-state lighting) LED module will debut in an unnamed premium vehicle this summer. Series production of the headlamp will start mid-year at Hella’s plant in Irapuato, Mexico, and at the end of the year in Jiaxing, China.

Global headlight standards are a mess, including significant differences between what’s allowed in the U.S. and Europe.

Adaptive headlights, which continually operate in high-beam mode but selectively block out individual LEDs as needed to prevent blinding oncoming traffic, are commonplace in Europe. The technology currently is prohibited in the U.S.—although NHTSA is reviewing the applicable FMVSS 108 standard.

Carmakers also have to design separate headlights for vehicles sold in right- and left-hand-drive markets.

Hella describes the new SSL global headlight as a micro-LED system with a 100-pixel array.

Digital control can activate each pixel individually and coordinate beam distribution in conjunction with regional regulations. For example, the same headlight can be tuned to optimize illumination—and minimize glare—for either right- or left-hand-drive roundabouts.

"We have a technical basis for implementing all lighting functions by using software and flexibly adapting them to regional requirements. This also includes additional functions such as glare-free high beam or projected orientation lines on the road," explains Michael Kleinkes, who heads Hella’s lighting technology development efforts.

Hella plans to adapt the digital control technology across its entire range of LED headlights, from 100-pixel units to high-resolution systems.

The company also is developing a next-generation system with a 30,000-pixel array that’s due to launch in 2022. SSL 100 is said to be a bridge to that technology.