Spin-on oil filters are popular. Really popular. About 60% of the 1.4 billion vehicles on the road worldwide have them.

Such systems are quick and easy to replace during an oil change. But there also is a major drawback: The entire unit has to be swapped out when the filter is changed, which creates tons of waste.

How big of a problem is it? Hengst, a Munster, Germany-based fluid management specialist, estimates the 2 billion global oil changes per year of vehicles with spin-on filters waste:

The latter is equivalent to the capacity of a large oil tanker and has to be disposed of as hazard waste, according to the supplier.

To combat the issue, Hengst is introducing what it claims is the world’s first reusable plastic spin-on oil filter module. The system, which is dubbed Blue.on, is being introduced in the Opel Astra with a 1.5-liter diesel engine. 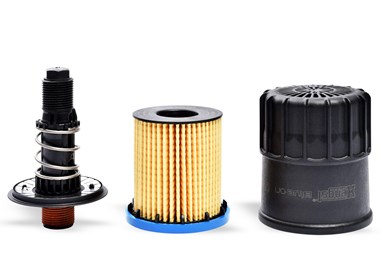 The new module consists of three components: the filter, valve piping that connects to the engine and an outer housing. But rather than replacing the entire module, as currently is done, Hengst’s Blue.on unit requires only that the filter be replaced.

The piping and housing are designed to last the life of a vehicle and are almost entirely recyclable. Hengst says this saves as much as 90% of the waste mass produced by conventional spin-on oil filters. 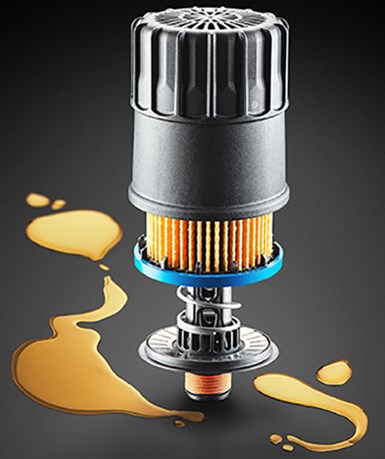 The housing module is made from BASF’s Ultramid Structure LFX, a long glass fiber-reinforced polyamide designed for high-temperature applications. BASF says the injection-molded plastic module is 23% lighter than its metal counterpart.

The material’s fiber orientation is optimized to reduce shrinkage and warpage and has a low tendency to creep, which creates the dimensional stability necessary to last the life of a vehicle.

Continued use of the factory-installed connection valves also helps maintain performance by eliminating the risk of inferior aftermarket parts and potential installation mistakes made by lube change technicians.