The all-composite 20-foot modules can carry about 600 kilograms of hydrogen and are due for delivery in the third quarter of 2021.

Hexagon Purus GmbH (Kassel, Germany) a Hexagon Composites company that specializes in lightweight composite components and systems, announced on July 18 that it has signed a contract with a major U.S. hydrogen fuel supplier and hydrogen refueling station operator to provide multiple X-Store all-composite transport modules for the distribution of high-pressure hydrogen gas. The contract has an estimated value of $4.8 million USD (approximately $45 million NOK) and includes additional purchase options that, if exercised, will bring the total value of the contract to approximately $7 million USD (approximately $65 million NOK).

According to the company, the contract represents the first North American customer for Hexagon’s X-Store line of transport modules for high pressure hydrogen gas. The purchased transport modules are composed of Hexagon’s proprietary, lightweight, Type 4,500 bar pressure vessels. The 20-foot modules are reportedly designed to carry about 600 kilograms of hydrogen, reducing transportation cost on a per kilogram of hydrogen basis, and further contributes to the commercial viability of fuel-cell vehicles. 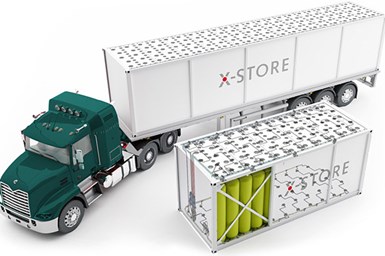 “The X-Store product will be an economic game-changer in the North American hydrogen fuel market because higher payload capacities mean lower overall transportation costs,” says Michael Kleschinski, executive vice president of Hexagon Purus. “The X-Store is already widely used in Europe and the rest of the world via a blue-chip customer base.”