Domino’s Pizza Inc. on Wednesday unveiled a Chevrolet Spark-based pizza delivery vehicle that it hopes gains widespread use across the company’s 10,000-franchise network in the U.S.
#LocalMotors #ROUSH #Chevrolet 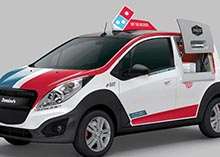 Domino’s Pizza Inc. on Wednesday unveiled a Chevrolet Spark-based pizza delivery vehicle that it hopes gains widespread use across the company’s 10,000-franchise network in the U.S. The Ann Arbor, Mich.-based chain, which pioneered pizza delivery in the 1960s, developed the customized DXP (delivery expert) hatchback in partnership with General Motors Co. and Roush Enterprises Inc.

About 100 franchisees in 25 markets have ordered DXPs during the initial rollout. The delivery vehicles will cost as much as $25,000 depending on options. A conventional subcompact Spark starts at about $12,200.

All seats, except the driver’s, have been stripped out. This allows the delivery car to carry as many 80 pizzas, assorted beverages and other menu items. A warming oven behind the driver heats up to 140°F and is accessible from outside via a key fob. Built-in coolers are used for beverages and salads.

Livonia, Mich.-based Roush handled the engineering work. It also will produce several of the new components and assemble the modified car. Ken Baker, a former GM vice president who headed the company’s EV1 electric car program in the 1990s, consulted on the program during the car’s three-year development.

The DXP retains the Spark's standard 1.2-liter 4-cylinder engine and continuously variable transmission. Domino's says it may consider adapting GM's all-electric variant of the car into a delivery vehicle.

The exterior gets a red-white-and-blue paint job to match Domino’s colors. In addition, a puddle light projects Domino’s logo on the ground. The design was chosen in part from entries submitted during a public contest sponsored by 3D manufacturing specialist Local Motors Inc.

Domino’s has contracted Chevrolet dealers in targeted markets to service the DXP. GM will cover standard warranty items and Roush will be responsible for the modified parts.

Domino’s goal is for each outlet to own at least one DXP, but it notes that franchise owners won’t be required to purchase a delivery car. Currently drivers use their own vehicles to make deliveries and are compensated on a per-mile basis. In the past, the pizza company has tried using a fleet of high-profile models that included DeLoreans and a three-wheeler with a pizza oven in the back seat.

The company employs 100,000 drivers who deliver about 400 million pizzas annually.