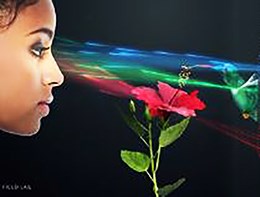 Instead of spinning LEDs or using “visual tricks,” Light Field says it recreates the way light rays bounce off objects to produce an immersive 3D experience in which realistic holographic objects appear to be floating in space. The technology has a resolution in the range of hundreds of gigapixels, according to the developer.

The startup was formed in 2017 by former employees of Lytro, a pioneer in light-field camera technology. Such cameras use a series of micro-lenses to measure the direction and intensity of light. Doing so enables users to adjust the focal point of a photo after it’s been taken.