Home Is Where the EV Charges

As it continues to expand its network of public charging stations across the U.S., Volkswagen’s Electrify America (EA) unit is increasingly targeting another electric vehicle battery outlet: home charging.

The reason? About 80% of owners rely on their own devices (at home charging) to replenish EV batteries.

Hoping to cash in on the home market, EA is launching a separate business unit—Electrify Home—to sell the Level 2 charger the company introduced last autumn. 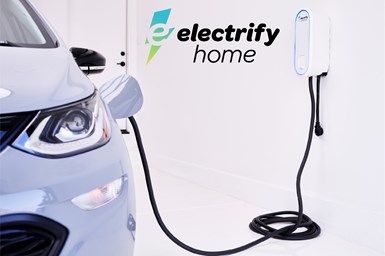 The $450 unit, which had been available only through Amazon.com, now will be sold directly on EA’s web site. Customers also can find, book and pay for local installers— via Qmerit—and access 24-hour customer support through Electrify Home.

EA’s initial home charger is a 240-volt Level 2 system with 7.6 kW of power that the company says can charge a vehicle six times faster than by using a standard 120-volt household outlet. The system includes a docking station that can be mounted indoors or outdoors, a 24.6-ft cable and a color-coded LED status indicator.

EA has opened 436 public charging stations—equipped with more than 2,000 chargers—for plug-in hybrid and electric vehicle owners across the U.S. since VW formed the company in early 2017 as part of its diesel emissions cheating settlement.

The network includes a coast-to-coast corridor (2,700 miles through 11 states) from Los Angeles to Washington, D.C., that was completed this summer. By the end of next year, EA plans to nearly double its capacity to some 800 stores and 3,500 chargers, which will include a mix of 150-kW Level 3 units and 350-kW Level 3 systems.

Wider availability of Level 2 home systems should further speed the effort, especially as costs come down.