The more ideas the better. That’s the approach Honda is taking to try to reduce the weight of its crankshaft assemblies.

The carmaker is working with Autodesk to generate thousands of simulated design iterations to optimize the engine part based on various operating and manufacturing parameters.

At the start of the program, Honda targeted a 30% weight reduction. The latest prototype using a 3D-printing process already has surpassed that goal by creating a unique shape that is half the weight of a conventional crankshaft, according to the partners. 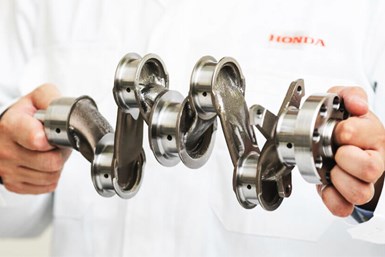 Honda still is evaluating the viability of the overall architecture. But the company says the design process has been a learning experience that it plans to apply to future production applications.

“While some still hold reservations about this new shape, the attention it has brought to the (additive manufacturing) technology has been worth the effort,” says Hirosumi Todaka, a mechanical and fluid machinery designer for Honda R&D’s advanced technology lab.

Crankshafts have a demanding job. They need to be extremely strong and durable to withstand combustion pressures—in harsh conditions over a range of operating parameters—while maintaining consistent balance to convert the oscillation of pistons into rotational forces.

As a result, the basic crankshaft design hasn’t changed much over the years. Carmakers tend to stick with what works.

Based on the inputs, Autodesk created a model that fulfilled Honda’s requirements. The initial prototype crankshaft resulted in a configuration that Todaka had not considered. “The part had an organic shape, like a human bone,” he says.

Honda mounted the prototype to an engine to test the design’s rigidity and strength. Based on the results, the carmaker has been able to adjust layout and strength criteria that can accommodate more flexible designs.

Autodesk’s generative software and rapid prototyping tools allowed the companies to fine-tune the design and quickly create new prototypes, which are currently being evaluated. Honda says the process is faster than conventional topology optimization that requires time-consuming manual corrections.

No timeline was provided for commercializing the lightweight crankshafts. But Autodesk notes that its generative design process already has been used to significantly reduce the weight of production seatbelts and engine control units.