Honda and Isuzu have agreed to cooperate on an advanced research program that could eventually lead to Honda’s fuel cell technology being adapted for use in Isuzu’s heavy-duty trucks.

But they also acknowledged some serious challenges. Chief among these are costs and a lack of a hydrogen infrastructure, as well as perceived problems with the fuel’s volatility.

Honda is one of a handful of carmakers that currently offers a fuel cell car. Its Clarity sedan is joined by the Toyota Mirai, Hyundai Nexo and Mercedes GLC. BMW also is readying its own model for a 2022 intro. 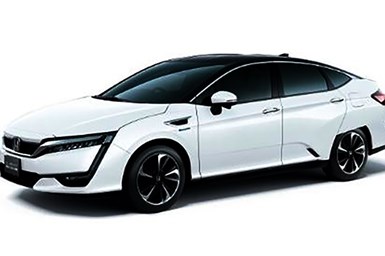 None has sold well, to say the least. Cumulative combined sales of the vehicles (including their predecessors) in the U.S. since 2012 total about 8,000 units. And they’re trending downward, falling 8% last year to fewer than 2,100 units.

Toyota, which has long championed the technology, hopes to jumpstart consumer interest with a sleeker version of the Mirai that’s due to launch this year. Last year, Toyota officials said they expect fuel cell vehicles to reach cost parity with hybrid-electric models within 10 years.

So, What About Trucks?

But several companies, namely Toyota and Hyundai, are moving forward with their own plans for fuel cell trucks. The list also includes Nikola Motor, an Arizona-based startup that is working with Bosch to launch several fuel cell and all-electric heavy-duty trucks.

Toyota, Hyundai and Nikola also are working together, along with three hydrogen suppliers to jointly test and standardize fueling hardware for the trucks. Such collaboration is needed to reduce development costs and expand the infrastructure.

Just temper any expectations, as Isuzu appears to be doing. In announcing the partnership with Honda, the smaller Japanese company was quick to point out that it is developing several other powertrain technologies, including electrification, natural gas and, yes, clean-diesel systems.