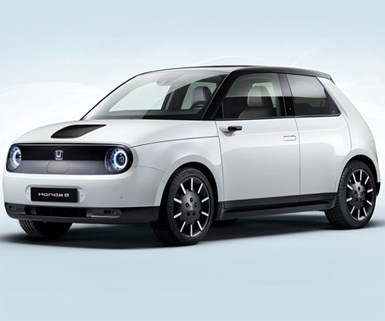 The car’s standard rear-drive electric motor makes 134 hp. A variant of the same motor offers 156 hp. Both choices use a 35.5-kWh battery that delivers a range as great as 136 miles and zero-to-100 kph acceleration of about 8 seconds.

Honda will present the “e” in final production form (pictured) next week at the Frankfurt auto show. The car’s styling features include outside rearview cameras instead of mirrors, pop-out door handles, a full-width digital dashboard and a smartphone app that acts as a digital key and remote monitoring system.

Honda is collecting reservations for the car online for customers in France, Germany, Norway and the U.K. The company, whose share of the European car market is less than 1%, has said it plans to electrify its entire lineup in the region by 2025.