In mid-April, state and local officials in Michigan asked Honda about the possibility of using Odyssey minivans to transport people to coronavirus test centers in Detroit. 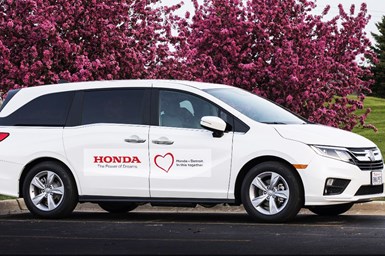 Honda had just done the same thing in Japan with 50 Odyssey and Step WGN minivans, which prompted the Michigan initiative.

Less than two weeks after the Michigan inquiry, 10 Odysseys outfitted with special safety modifications were delivered to the City of Detroit.

Detroit has been one of the hardest hit areas of the countries by the pandemic, with more than 1,100 deaths. Increased testing can help mitigate the rate of infection.

The modifications, which include a plastic partition behind the front seats and enhancements to the ventilation system, were designed and installed by volunteers at Honda’s research and development center in Raymond, Ohio.

This is the same facility where the U.S. version of the minivan, which is larger than its Japanese counterpart, was developed. Honda builds the 8-seat Odyssey at its plant in Lincoln, Ala.

The retrofit team in Ohio included senior engineers and fabrication experts. It was led by Mike Wiseman, senior director for Strategic and Materials Research of Honda R&D Americas.

To protect drivers from being exposed from respiratory droplets from passengers being transported to test centers, a sealed, clear polycarbonate panel was installed between front and middle-row of seating.

The retrofit required replacing B-pillar hand grips with brackets to attach the plastic panel. A second bracket was fabricated and attached to the lower front seat belt anchor point for a total of three attachments on each side.

Material fabrication, installation and the software adjustments all were completed in-house by the Ohio workers. Honda says the air pressure differential is compliant with CDC guidelines for negative pressure rooms in medical and research facilities.

In addition to the specially equipped Odyssey transport vehicles, Honda is engaged in several other initiatives to help combat the coronavirus.

Last month the company began producing ventilator compressors at its technical center in Marysville, Ohio. The company is partnering with Reading, Pa.-based Dynaflo on the project.