2021 pickup is designed to look the part
#Honda

When you think of a pickup truck, the Honda Ridgeline probably isn’t the first one that comes to mind.

The vehicle itself, which debuted in 2005, has always been more than serviceable. But some critics look down on the Ridgeline because it’s built on a car-based unibody chassis and, perhaps more importantly, doesn’t look like a truck.

Honda is standing by the unibody platform, which it notes provides ride and handling benefits.

But the company now acknowledges the Ridgeline’s lack of traditional truck machismo and is addressing it with a mid-cycle makeover.

The 2021 model gets a more aggressive front end that starts with a squarer, power-bulge hood that replaces the current sloped design. A larger, more upright grille adds teeth to the look. 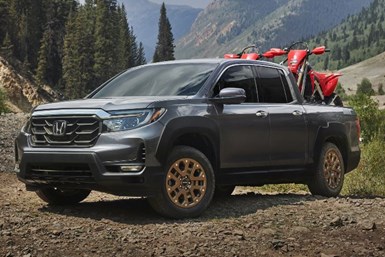 The midsize pickup also gets new LED headlights and a redesigned front bumper with large side vents. In addition to styling pizazz, the revisions improve illumination and boost aerodynamics, respectively.

Other goodies include a wider track, 18-inch wheels and all-season tires with a more aggressive sidewall treatment.

Body color paint extends further down onto the bumper, and a skid plate is positioned below to convey the truck’s off-road bona fides. The rear also gets a restyled bumper that accentuates new twin exhaust pipes.

The interior is largely unchanged.

Honda points to an updated infotainment system with crisper graphics and easier-to-use icons. As a retro throwback, there’s also a physical knob for volume control.

The 3.5-liter V-6 engine and 9-speed automatic transmission will be carried over from the current model. The engine makes 280 hp and 262 lb-ft of torque.

Front-wheel drive continues to be standard. The optional all-wheel-drive system includes torque vectoring that can direct all of the drive torque sent to the rear axle to either side of the vehicle as needed.

The pickup bed can accommodate 4-ft wide items and a trunk-like compartment provides 8 cu-ft of storage below the bed.

Payload and towing and payload capacity remain the same at 1,500 lbs and 5,000 lbs, respectively.

The mid-cycle freshening puts a new face on the second-generation Ridgeline, which was introduced in 2017, with a clear emphasis on the truck part of pickup truck.

Here’s how Art St. Cyr, vice president of auto operations for American Honda, sums up the new look: "Truck enthusiasts have long recognized Ridgeline as an incredibly versatile and capable pickup, and now it's got the rugged looks to match.

"The Ridgeline signals a new direction for our light-truck designs,” he adds, “one that more effectively communicates all the hard work that goes into making Honda pickups and SUVs such proficient on- and off-road performers."

The 2021 Ridgeline is due early next year. Pricing will be announced closer to launch.