“We had one goal for Hummer EV: build the most capable truck in GM's history,” enthuses Al Oppenheiser, the vehicle's chief engineer. "It's an absolute off-road beast with a unique 4-wheel-drive system that provides maneuverability unlike anything GM has ever offered before." 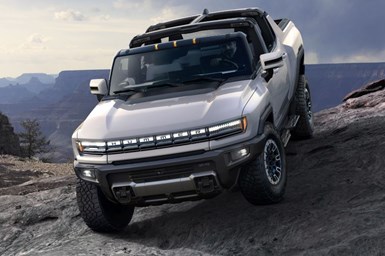 That’s a bold statement, especially considering the rugged electric vehicle is more than a year away from production—with competition mounting from Tesla, Rivian, Ford and others.

But if first impressions count, the all-new Hummer pickup has a good chance to live up to the hype. And there’s no denying its “beast” bona fides.

General Motors took the wraps off the all-new GMC Hummer pickup in a series of photos and videos released Tuesday night. 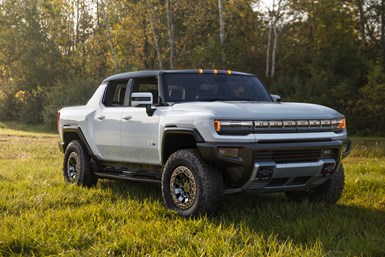 First up is the aptly named range-topping Edition 1 (pictured), which will start at $112,600. Production is expected to begin in late 2021.

The Edition 1 will be followed by the:

Starting today, customers can reserve any variant with a $100 deposit. GM will build the Hummer at its so-called “Factory Zero” plant in Detroit.

Built on GM’s new BEV3 platform, the Hummer is nearly as big as the Yukon XL.

The electric pickup rides on a 136-inch wheelbase and stretches 217 inches from bumper to bumper. It stands 81 inches tall. 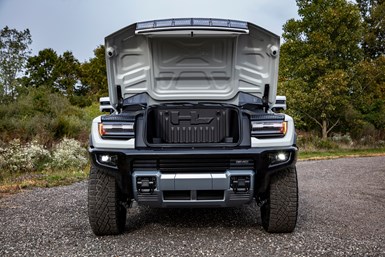 Highlights include a towering fascia—akin to previous Hummers—with a six-slot grille flanked by thin headlights. The look is complemented by an upright windshield and squared-off hood.

The “Infinity Roof” consists of four clear panels that can be removed and stored in the front trunk. For the full open-air effect, users also can remove the roof’s central I-bar—which stows under the rear seats—and electrically lower the back window.

Only one body style will be available: a full 4-door cab with a short bed. All Edition 1 models will feature a white exterior and a Lunar Horizon interior.

Several of the Hummer’s features and performance capabilities already have been announced.

But they bear repeating.

The Edition 1 model is powered by three electric motors—one in the front and two in the rear—that generate a combined 1,000 hp.

GM also has been touting a seemingly unheard-of torque level of 11,500 lb-ft. But this most likely refers to axle torque, which is considerably higher than the more common engine torque measurement. Analysts estimate the latter to be about 1,400 lb-ft for the Hummer, which still would be extremely impressive.

The 200-kWh Ultium battery will allow the Hummer travel more than 350 miles between charges, GMC estimates.

In addition, the truck’s 800-volt electrical architecture will allow the battery to be charged on 300-kW systems (as they become available). At that level, users could replenish 100 miles of range after 10 minutes of charging.

Top end performance is accessed via a “Watts to Freedom” mode, which is available only in the Edition 1 and 3X models.

The system, which can rocket the Hummer from zero to 60 mph in three seconds, includes torque vectoring, special ride height and shock damping settings, and four-wheel steering. The latter, which GMC calls CrabWalk, allows the rear wheels to turn in conjunction with the front ones at low speeds to enable diagonal driving and a 37-ft turning radius.

Other features include haptic feedback, specially tuned performance sounds and unique graphics and off-road info accessible via the instrument cluster.

Riding on a fully independent suspension with adaptive air shocks, the new Hummer will be able to drive through more than two feet of standing water and scale an 18-inch vertical obstacle. When set in its max-height off-road mode, the suspension can be raised eight inches. This results in a 50° approach angle and 13 inches of travel. GMC says the shocks can respond to road inputs 500 times per second.

Front and rear underbody cameras with an industry-best 18 viewing angles—including the inner sections of all four tires—display live feeds to help drivers navigate around rocky terrain and other obstacles. To keep them clean, the cameras are equipped with washing mechanisms.

GMC didn’t provide much information about the interior, other than to say it will feature "premium, technical materials."

Highlights include a 13.4-inch infotainment touchscreen and a 12.3-inch instrument display.

The Hummer also will be equipped with the latest version of GM’s Super Cruise semi-autonomous driving technology with automatic lane-changing capability.

The three-motor system with torque vectoring also will be used in the EV 3X. But power is expected to be limited to 900 hp, while driving range is estimated at 300 miles. 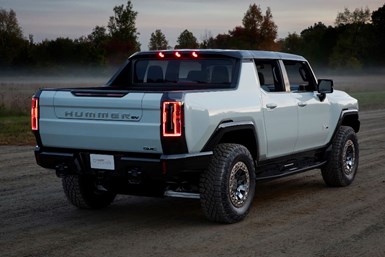 The base model, which GMC calls Hummer EV2, and the mid-level 2X will get only two motors. The 2X adds an air suspension and CrabWalk.

A SUV variant also is in the works.

"The GMC Hummer EV is revolutionary, defying what the industry thinks of as a pickup truck," declares Duncan Aldred, vice president of GMC and Buick.

That definition is likely to change dramatically over the next few years, thanks to the new Hummer and a parade of other upcoming electric trucks from Bollinger, Ford, Lordstown, Rivian and, of course, Tesla.