Teaming retro styling with a high-tech interior, Hyundai’s new Prophecy concept car promises to live up to its name in previewing the carmaker’s electric vehicle intentions.

Hyundai has provided more details about the sleek sedan, which it unveiled online early last month after the Geneva auto show (where the car was supposed to have been unveiled) was canceled. In addition to loads of photos, Hyundai also released two new videos of the Prophecy with design chief Luc Donckerwolke. Check out the exterior walkaround (above) and interior highlights (bottom).

Earlier this year, Hyundai Group announced plans to nearly double the combined hybrid/EV lineups for its Hyundai, Kia and Genesis brands to 44 models by 2025. The rollout includes: 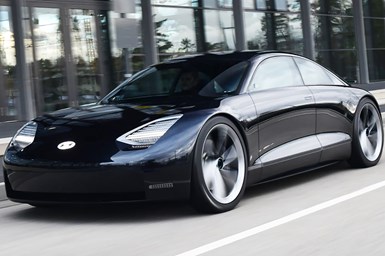 The Prophecy’s swoopy styling is an evolution of Hyundai’s “Sensuous Sportiness” design language, which debuted on the 2018 Le Fil Rouge concept, while also paying homage to vintage cars of the 1920s and ’30s.

Highlights include a coupe-like roofline, propeller-inspired wheels and a rear spoiler. The Prophecy also features pixelated headlights and taillights, a pattern the carmaker says will be used in future models. 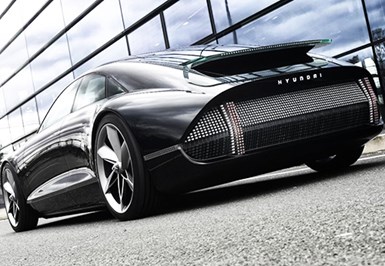 The pixel design carries through to the interior door panels. Hyundai says the look represents the digitalization of the company’s products.

In addition to its own E-GMP, Hyundai plans to source EV platforms from Canoo and Arrival for compact cars and commercial vehicles, respectively.

In place of a traditional steering wheel, the Prophecy is controlled by a pair of joysticks—one on the center console and the other on the driver-side door trim. Hyundai says 90% of the vehicle’s functions can be controlled via buttons on the joysticks. 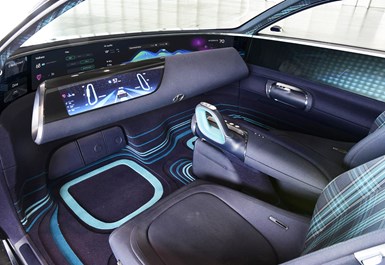 The design also frees up dashboard space, which is put to use with a massive digital screen that takes up a good chunk of the real estate.

Other goodies include “smart posture care” seating and a relax mode. The former automatically adjusts the seat position, rearview mirrors and head-up display based on a driver’s height and weight.

In relax mode (when the car is parked or for fully autonomous driving), the seats recline and the dashboard swivels upward. This enables the optimal seating position to view videos and other content shown on the display. Without the steering wheel, Hyundai notes, occupants have virtually zero visual obstacles.

The dark colors and natural materials used throughout the interior also are designed to create a relaxed atmosphere.

A sophisticated air filtration system uses sensors to detect excess dust and pump in fresh air to help cleanse the cabin. Incoming air is filtered and circulated throughout the interior.

Hyundai says the system operates continuously, regardless if the car is running, charging or if anyone is sitting inside. If fresh air isn’t needed, the filtered air is pumped outside via outlets at the bottom of the side doors. The system is significantly more energy-efficient than a traditional ventilation system, according to the carmaker.