Hyundai Motor Co. confirms it will begin producing the Santa Cruz compact pickup truck at its U.S. assembly plant in Montgomery, Ala., in 2021.
#Kia #Hyundai

Hyundai Motor Co. confirms it will begin producing the Santa Cruz compact pickup truck at its U.S. assembly plant in Montgomery, Ala., in 2021.

The company described the truck in July as a versatile utility vehicle that will define a new market segment. The Santa Cruz debuted in concept form (pictured) at the Detroit auto show in 2015. 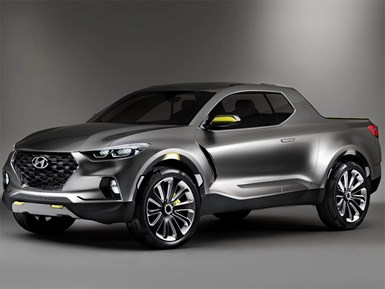 The coupelike concept has four doors, with the second-row pair hinged at the rear.­ The vehicle’s short cargo bed has a sliding tailgate extender. Hyundai says the truck was designed to appeal to non-traditional truck customers.

Hyundai plans to spent $410 million to expand the Alabama complex for the Santa Cruz, adding 200 jobs at the plant and another 1,000 in the region. The project will install new metal stamping, welding and parts processing areas for the vehicle.

The Alabama complex currently builds the Santa Fe SUV and Elantra and Sonata sedans. Hyundai indicated earlier that its Kia brand may eventually get its own variant of the truck.