The name of Hyundai’s new transmission technology is somewhat vague. It also is a mouthful: Information and Communication Technology (ICT) Connected Shift System.

But the concept itself is forward-thinking. Literally.

In what’s touted as a world first, ICT uses information about upcoming road and traffic conditions to automatically shift the transmission.

It’s designed to find the right gear, at the right time. Whether you’re driving up a hill, swerving around a corner, merging ahead or slowing for traffic.

ICT builds on existing transmission control systems that allow drivers to select among different settings, such as sport or efficiency modes. 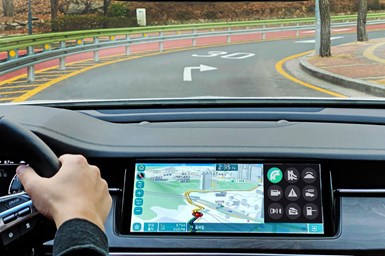 The new system takes this a step further by incorporating real-time data from driver-assist sensors, high-definition maps and other inputs.

The 3D maps include precise elevation, gradient and curvature measurements. Radar detects the relative speed and distance of nearby vehicles, while a forward-looking camera provides lane information.

The information is fed into an artificial intelligence algorithm that calculates the optimal transmission setting and automatically shifts gears accordingly.

When entering a highway, for example, a sport setting is applied and shifts are timed with rapid acceleration to help drivers smoothly merge into traffic flow. Once this has been accomplished, the vehicle automatically returns to the base driving mode.

Conversely, the system can shift the transmission into neutral if an extended but gradual slowdown in traffic is detected.

During tests on a curvy road, vehicles equipped with ICT were able to navigate turns with 43% fewer shifts. As a result, drivers didn’t have to brake as much, which the carmaker notes improves efficiency and reduces fatigue.

ITC Predicts Your Next Move

The engine brakes are automatically applied as the accelerator pedal is released in preparation of a downhill slope, reduced speed limit or even an upcoming speed bump.

In addition, the system can change gears in anticipation of a slowdown as the closing distance to preceding vehicles shortens.

Hyundai says future advances also could be made to use V2X technology to coordinate gear shifts with traffic lights. ICT also is designed to be used in future self-driving vehicles.

Hyundai developed the system with its Kia affiliate. The partners have applied for about 40 patents related to the technology and plan to introduce it on unspecified future models.

Now they only need to come up with a better name. One option: Intelligent Control Transmission, which would maintain the ICT nomenclature. But Smart Shift is even better. It’s crisp and precise, just as the technology is described.