R-AEB automatically applies the brakes if the driver doesn’t when people and other objects are detected when the vehicle backs up. 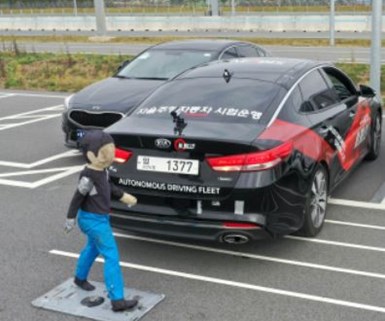 Hyundai Mobis claims USRR is faster and has a longer (up to 16 feet) and wider range than current ultrasonic devices. The patent-pending technology also is claimed to be better at detecting moving object, isn’t impacted by poor weather and is impervious to interference from sensors in other vehicles.

Hyundai Mobis was eager to use radar as an alternative to ultrasonic sensors and cameras, which can be adversely affected by weather and lighting conditions, respecitvely. But the company said it had to first develop new sensing technologies and improved control algorithms to overcome the limitations radar has in detecting objects that are close to a vehicle.

Hyundai Mobis verified USRR’s performance in 12 real-world driving scenarios involving nearby pedestrians and objects, narrow parking spaces and speed bumps. The technology currently is being tested by U.S. and European safety organizations, according to the company.