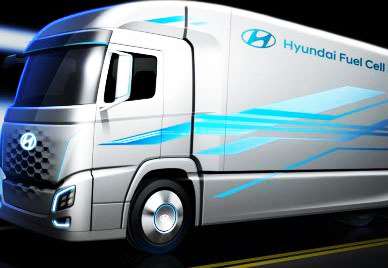 A teaser image of the vehicle shows the truck will feature a unique grille design and blue side body graphics. Hyundai will take the wraps off the vehicle and reveal performance specifications next week at the IAA commercial vehicle show in Hanover, Germany.

Hyundai, which already offers the Tucson fuel cell SUV, will introduce the all-new Nexo crossover model later this year. The company also is developing fuel cell buses that it plans to launch in 2020 as part of a government initiative in South Korea.