Hyundai Motor Co. says it has developed an active noise cancellation technology that can more effectively mitigate sounds transmitted to the passenger cabin than is possible with current systems. 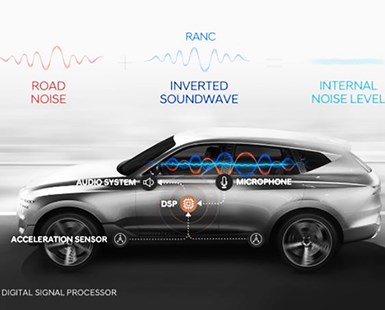 Dubbed Road Noise Active Noise Control (RANC), the new patent-pending system can cut interior noise levels to 3 dB—about half the level in vehicles without noise cancellation, according to the carmaker.

Hyundai says the system can analyze noises in real time and produce inverted soundwaves in one-fourth the time (.002 seconds) it takes for such sounds to reach vehicle occupants. The canceling soundwaves can be tuned to simultaneously minimize noise levels for the driver, front- and rear-seat passengers.

Hyundai spent six years developing the technology in conjunction with the Korea Advanced Institute of Science and Technology, audio supplier Harman International and university partners. The carmaker plans to introduce the system on an unnamed upcoming Genesis luxury vehicle.