An edgy and aggressive look based on “parametric shapes and textures.” That’s how Hyundai describes its redesigned 2021 Elantra small car due in September. 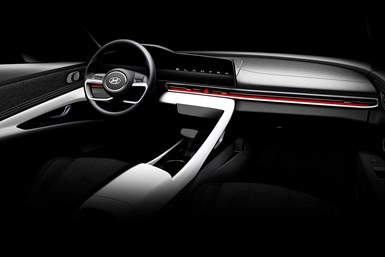 Although the carmaker has big plans to expand its crossover lineup, Hyundai also is taking care of its sedan portfolio. The new Elantra follows in the wake of the 2020 Sonata midsize car, which also features a stylish redesign—some of which is incorporated into its compact counterpart.

Both cars are vital to Hyundai’s future. The Elantra, which is known as the Avante in some markets, is Hyundai's bestselling car globally, and the fourth-best-selling compact car in the U.S. More than 13.8 million Elantra/Avantes have been sold since the first-generation models debuted 30 years ago.

The seventh-generation Elantra is longer, lower and wider than the somewhat staid current sedan. Design cues include an enlarged version of Hyundai’s cascading grille, which also is used on the Sonata, with fully integrated headlamps and lower air intakes.

Parametrics comes into play with three “character lines” that converge into a point in the middle of the front doors. This creates a multi-planed "polyhedral” 3D appearance, Hyundai says.

The rear features a faster backlight, full-length taillight and angled rear fascia. The wraparound look echoes that of the Sonata.

The driver-focused minimalist design features a large center touchscreen that blends into a digital display. Other goodies include a redesigned steering wheel and shifter.

Hyundai will take the wraps off the 2021 model next week during a livestream event in Los Angeles.