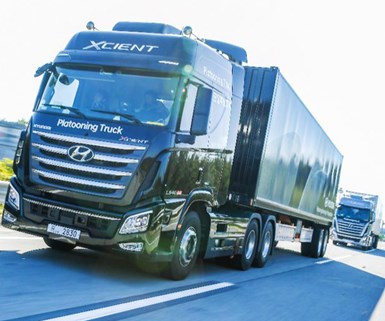 During the tests, a pair of Hyundai Xcient 40-ton trailer trucks are equipped with vehicle-to-vehicle communications and advanced driver-assist systems. Hyundai says the following truck is able to maintain a constant distance from the lead vehicle within the same lane, and automatically adjust the trailing distance if another vehicle cuts in between them.

Hyundai says the V2V technology enables the following truck to react quickly to hard braking and emergency maneuvers. The trailing vehicle also can access the front truck’s camera to provide video images of the road ahead.

The tests are part of a demonstration project led by Korea’s Ministry of Land, Infrastructure and Transport on the country’s Yeoju Smart Highway, a 4.8-mile closed course used for autonomous vehicle testing. Last year Hyundai tested an SAE Level 3 self-driving truck on a public highway in Korea.

Additional tests are planned in coming months to gauge the viability and potential benefits of the technology. Traveling in close platoons can reduce air resistance, thus improve a vehicle’s fuel efficiency. Platooning also promises to improve safety and traffic flow.