Hyundai to Test Robo-Taxis in California 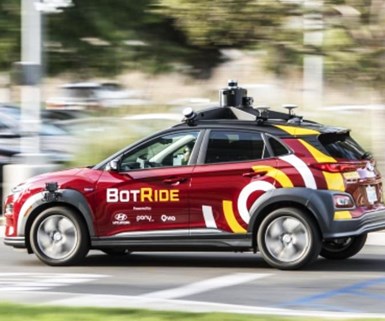 The program, called BotRide, will use 10 all-electric variants Hyundai’s Kona small crossover vehicle. The cars will be equipped with sensors and software developed by Pony.ai. Users will be able to reserve free rides in the vehicles (which will include a backup driver) during select times to 13 destinations in Irvine.

The smartphone app platform was developed by New York City-based Via Transportation Inc. Via’s algorithms coordinate shared rides among multiple people from nearby pickup spots headed in the same direction.

The service area covers several residential, commercial and institutional points of interest, according to Hyundai. Due to run through the end of January, the pilot program will help the partners monitor the effectiveness of the service and how consumers use it.

Earlier this month, Hyundai announced plans to invest 41 trillion won ($34.6 billion) over the next six years to develop next-generation mobility technologies and services. The carmaker also is forming a joint venture with Aptiv plc with a goal of beginning high-volume production of Level 4 driverless vehicles by 2024.

Pony.ai, a Silicon Valley-based startup, raised $112 million in a Series A funding round in early 2018. The company also is partnering with Toyota to develop and deploy self-driving vehicles in China.