The new concept switches to a rear-wheel-drive configuration, which Hyundai says is more stable than the previous front-wheel-drive concept. A front suspension system also has been added to enhance ride quality. 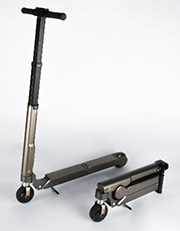 The new model, which weighs 17 lbs, has a range of 12 miles and a top speed of about 12 mph. Hyundai didn’t disclose the technical specifications of the Ioniq scooter that was unveiled at the 2017 CES electronics show.

Other new features include LED lights and a digital display that shows speed and battery status. Hyundai says it plans to add regenerative braking on future designs, which the carmaker estimates will boost driving range by 7%.

As with the Ioniq, the new model folds up to allow it to be easily carried or stowed. Hyundai envisions installing charging docks in next-generation electric cars to help replenish the scooter’s battery.

The company applied for a U.S. patent on the scooter last year. Media reports at the time also said Hyundai was looking for a partner in South Korea to produce the device.

Watch a video demonstration of the new scooter HERE.