Hyundai Motor Group’s big plans to electrify its lineup will ride in part on a “skateboard” chassis developed by Los Angeles-based startup Canoo.

The scalable architecture is expected to carry a range of upcoming compact Hyundai and Kia models. Earlier this year the South Korean carmakers announced plans to nearly double their combined hybrid/EV lineups to 44 vehicles by 2025.

They also inked a deal with another startup, Arrival, to jointly develop electric commercial vehicles.

You probably haven’t heard of it. Canoo was founded three years ago as Everlozity by a group of former Faraday Future executives (not exactly a ringing endorsement), which has struggled to get its own ambitious EV plans off the ground.

But Canoo’s management team, which came from BMW, wasn’t the problem with Faraday (the blame there goes to founder Jian Yueting). After starting the new EV company, they quickly raised nearly $1 billion from international investors. 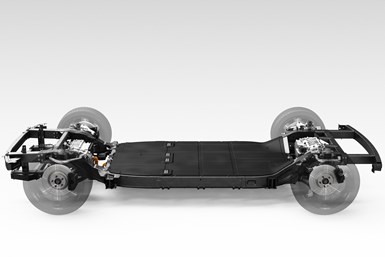 Last year Canoo unveiled its skateboard platform, which it says can be used for everything from a small commuter car to a last-mile delivery van. The architecture houses the battery and electric drivetrain.

Canoo aims to launch its own EV—a 7-passenger “lifestyle” minivan—based on the platform next year. Described as a “loft on wheels,” the vehicle will be sold on a subscription basis. Several other models also are in the works.

Canoo will provide engineering services to adapt the self-contained platform, which can be paired with any cabin, to meet Hyundai and Kia specifications.

The proprietary design reduces the skateboard size, weight and number of parts, according to the partners. Purported benefits include:

In addition to passenger cars, Hyundai/Kia plans to use the platform for purpose-built vehicles (PBVs) that can be customized for corporate clients, including fleets for transport, logistics and distribution companies. Kia says industrywide PBV sales (fueled by robo-taxis and e-commerce) could grow to 25% of the global market by 2030, compared with less than 5% today.

Hyundai’s strategy is similar to the relationship Ford has with Rivian.

The Plymouth, Mich.-based startup will supply its own skateboard chassis to Ford for future electric trucks. The first model will be a Lincoln-badged SUV that is due to bow in 2022.

Rivian, which is launching its own R1T pickup and R1S SUV later this year, also will build 100,000 electric vans for Amazon. Both Ford and Amazon are major investors in Rivian.

Outsourcing the base platform, will enable Hyundai and Ford to launch next-generation EVs faster and cheaper than they would have been able to do on their own. It also reduces risks and expands their technical expertise.

Now all they have to do is develop products that customers want.