Electric vehicles have a Catch-22 problem. Widespread adoption isn’t likely until costs come down. But the latter relies heavily on the former.

Batteries play a big part in the conundrum. Not only from a cost standpoint, but also as the key component to reducing range anxiety and reducing charging times.

This has resulted in an industrywide scramble for a next-gen solution. Potential “breakthroughs” are announced weekly—mostly involving solid-state technologies. The latest news comes from IBM Research, which claims the chemistry it’s developing is cheaper, more powerful, faster to charge, less volatile and more sustainable than current lithium-ion units.

IBM is no stranger to battery development. The tech giant has a dedicated battery lab, where it has been devising new formulations for more than a decade. Its latest handiwork features three proprietary materials extracted from seawater in place of mined heavy metals, which tend to be pricey and hard to come by. 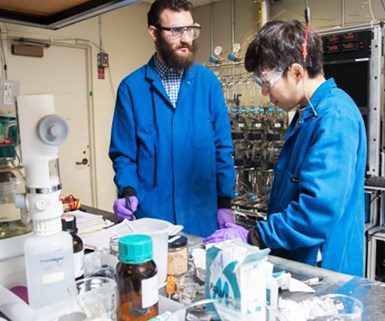 The design teams a cathode material that contains no cobalt or nickel with what they describe as a “safe” liquid electrolyte with a high flash point. Initial tests have shown the combination suppresses the growth of lithium dendrites, which can zap performance and increase flammability risks.

Among the purported benefits are:

IBM aims to have working prototypes of its battery system ready in about a year. Next steps include employing atomic force microscopy and an artificial intelligence technique called semantic enrichment to help identify even safer and higher performance materials.

To help speed the initiative, the company is working with researchers at Mercedes-Benz, electrolyte supplier Central Glass and batterymaker Sidus Optoelectronics. But IBM cautions that the technology is still in the early development phase and may never be commercialized.