Volkswagen has produced more than 6 million vehicles at its plant in Zwickau, Germany, over the past 30 years, averaging about 250,000 Golfs, Passats and Polos annually in recent years.

All of these cars have had an internal combustion engine. Until now. 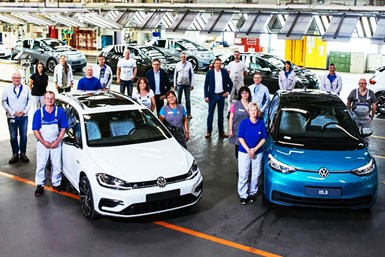 The company will ramp up output of the ID.3 hatchback this autumn (production of the inaugural ID.3 1st Edition already has started).

Five other Audi, SEAT and VW EV models will be added to the mix later. All are based on the carmaker’s modular electric toolkit (MEB) platform, which is designed specifically for EVs.

All told, the carmaker plans to produce 330,000 EVs next year in Zwickau. By VW’s calculations, this will make the German factory the highest volume EV plant in Europe.

That distinction likely will be short-lived, though. That’s because Tesla plans to open its third global mega-facility next year with its own plant in Germany that will have annual capacity of 500,000 units.

Work to be Done 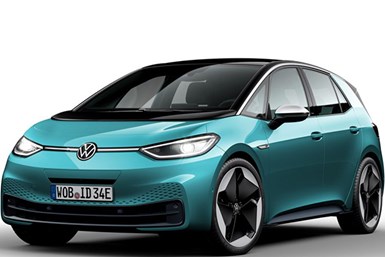 VW has budgeted €1.2 billion ($1.4 billion) to convert its 19.4 million-sq-ft plant from ICE models to EVs. The company already has started the process in Hall 6, where the Golf previously was built.

All 8,000 Zwickau employees also are in the process of being retrained to build electric cars and to handle high-voltage components. Collectively, the team will complete some 20,500 days of training by year-end.

Zwickau is just the first step in VW’s electrification transition. The company plans to spend €33 billion ($37 billion) by 2024 to develop and build the next-generation models.

Across its various brands, Volkswagen Group plans to introduce 30 EVs by 2025 and 75 over the next 10 years.

It all starts with the $33,000 Golf-like ID.3 in Zwickau—a plant whose origins date back to the beginning of the auto industry, starting with Audi’s predecessor, Horch, in 1904.