Lane-centering and adaptive cruise control can help keep motorists out of trouble. But they also end up encourage distracted driving. 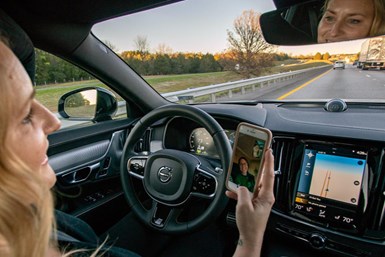 How so? As operators become accustomed to automated aids, they’re more likely to take their hands off the wheel and divert their attention from the road to their phones or their vehicle’s entertainment system, say researchers at the Insurance Institute for Highway Safety and MIT’s AgeLab.

They studied the behavior of volunteers who spent a month driving either a Range Rover Evoque SUV equipped with adaptive cruise control (ACC) or a Volvo S90 sedan with ACC and automatic lane-centering.

At first, drivers behaved the same whether the automated devices were engaged or not. But a month later, there was a big difference, as test subjects got used to using the technology. The greatest change occurred among the Volvo drivers and their use of automatic lane-keeping.

“Compared with driving manually,” says Ian Reagan, IIHS senior researcher and lead author of the study, “they were more than 12 times as likely to take both hands off the wheel after they’d gotten used to how the lane centering worked.”

So what? Reagan cautions that lane-keeping systems can easily lose their way—when lane marker lines disappear, for example—and require the driver to take over instantly. His concern is that drivers can, over time, be lulled into a false sense of security.

That’s why IIHS is lobbying to enhance lane-assist systems with the ability to determine whether the driver is looking at the road. The institute issued an array of recommendations, including how partially automated driving systems should respond when they detect driver inattention.

IIHS recommends a series of quickly escalating attention alerts, starting with a brief visual warning, then an audible or physical alert. If those alarms don’t produce a response, they all should become more urgent. Pending a driver response, the system should then pulse the brakes and put more following distance from the vehicle ahead.

And if the driver still hasn’t reacted, the system should activate the hazard lights and slowly stop the vehicle, preferably at the side of the road.

IIHS advises that the system also block the driver’s use of robotic driving features for the remainder of the trip.

IIHS notes that no carmaker currently employs all of these measures. It also points out that some systems switch off if the driver fails to respond. If the driver has become incapacitated, that means neither the driver nor the lane-keeping system is steering the vehicle.

IIHS’s series of rapidly escalating alerts, culminating in an automatic emergency response, is logical approach to the problem of relying too heavily on Level 1-2 driver assist features.

But there’s a bigger issue here.

If an inattentive driver’s car begins to drift off the road or into oncoming traffic, there may be only a few seconds in which to respond. That doesn’t leave much time for the driver (or the car’s robotics) to respond fast enough to avoid a crash.