Stronger safeguards are needed to keep drivers engaged when vehicles are operating under Level 2 autonomous driving systems, the Insurance Institute for Highway Safety asserts in a new report.

"Unfortunately, the more sophisticated and reliable automation becomes, the more difficult it is for drivers to stay focused on what the vehicle is doing," says IIHS President David Harkey. "That's why systems should be designed to keep drivers actively engaged." 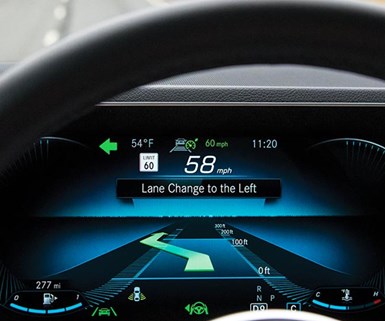 Partially autonomous systems, which can control braking, steering and throttle functions under certain conditions, should be based on a principle of shared control, IIHS says. In addition, the non-profit group recommends having built-in limits that prevent autonomous operation under conditions and roads where it isn't safe to do so.

As part of the study, IIHS suggests the following guidelines for automated systems:

Current systems either assume the driver is paying attention when his or her hands are on the steering wheel, or use a camera to determine if the driver’s head is oriented toward the road. Neither method is foolproof, according to the safety group, which advocates using a driver-facing camera in conjunction with measuring manual adjustments to the steering wheel as a failsafe.

If it’s determined that a driver’s attention has strayed from the road, IIHS calls for a series of alerts. The first should be a brief visual prompt. If this doesn’t do the trick, it should be followed by an audible or physical alert (such as a seat vibration), then a more urgent visual message.

The next step is to implement all three types of warnings simultaneously with increasing frequency and tenacity. If the driver still isn’t responding, IIHS says the automated system should deploy the hazard lights and gradually bring the vehicle to a stop.

The driver would be able to override the system at any time by resuming throttle, steering or braking control. But IIHS recommends that Level 2 access shouldn’t be permitted during the remainder of a trip if a safe stop procedure has been triggered or a set number of attention reminders has been reached.

IIHS says it reviewed dozens of academic studies and current vehicles to develop the recommendations.

The group praises Cadillac's Super Cruise for being the only system that uses GPS-enabled navigation to limit its use to specific highways that engineers deemed suitable to handle. However, IIHS takes Super Cruise to task for not requiring the driver's hands to be on the wheel, relying instead solely on a driver-monitoring camera.

IIHS also faulted systems offered by BMW and Mercedes that allow drivers to trigger an autonomous lane change by flicking the turn signal. Tesla’s Autopilot system is even more egregious, allowing the vehicle to make such decisions on its own without a driver prompt.

The problem? IIHS contends that drivers are more likely to lose track of what is happening on the road when their role is minimized, which could create a false sense of security that causes drivers to initiate the automatic procedure without confirming that the lane next to them is empty. The authors point to several recent fatal crashes involving vehicles operating autonomously to illustrate the risks of driver disengagement.

"These systems are amazing feats of engineering," says Alexandra Mueller, the lead author of the IIHS study. "But they all suffer from the same problem: They don't account enough for the behavior of the human being behind the wheel."