The industry-first technology, which Honda co-developed with Autoliv, will debut this autumn on the redesigned TLX midsize sedan. In addition to future Honda-Acura models, the partners plan to market the system to other carmakers. 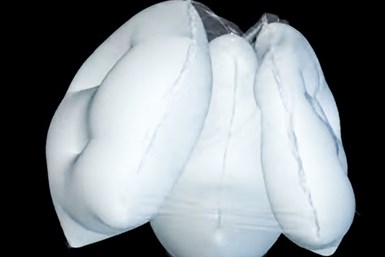 The design creates a wider base across the dashboard. A new “sail panel” that stretches between the side chambers helps catch an occupant’s head, then pulls the side panels in to cradle the head to help mitigate potential brain injuries.

Likening the device to a baseball catcher’s mitt, Acura says the system better manages lateral forces and helps prevent a person’s head from rotating or sliding off the airbag. This is particularly beneficial in off-axis collisions in which the seat occupant isn’t thrown straight into the airbag, the carmaker notes.

Using the empty space immediately behind the sail panel lessens the impact of the airbag. Honda says the softer design also enables the system to be deployed faster during a crash.

The 2021 TLX is equipped with eight airbags—the most ever for the car. 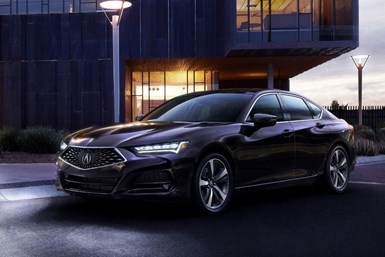 In addition to the new passenger unit, the vehicle has a driver airbag, side and knee airbags for the driver and front passenger and side-curtain airbags with a rollover sensor.

The new knee airbag, which is designed to better control the forward motion of the occupants during frontal collisions, is housed beneath a panel under the instrument panel. The panel is contoured away from the knees, which Acura says boosts legroom and improves ingress and egress from the car.

The TLX also gets an updated version of Honda’s Advanced Compatibility Engineering body structure. This includes a large central floor tunnel made of high-strength steel that Honda says enhances safety as well as increases body stiffness for improved performance.